It’s about 4:30 on a late summer afternoon.  I’m busy trying to put together a pot roast for dinner and clean the kitchen and family room while Liam, my seventeen-month-old son, is napping. Oscar, our basset hound, sits at my feet and stares at me; he wants his dinner. A car door slams. Oscar barks. I hear a groan and a whimper followed by a rustling sound over the baby monitor. “Darn,” I think, “it’s too early for Liam to wake up; I’m not done yet.”

No dice. “Da Da?” I hear Liam say quietly over the monitor.

A huge smile crosses my face… I’m an at-home dad, and I couldn’t be happier.

Ever since I was a little boy I have known that I would be a father someday, but up until a couple of years ago I hadn’t given a lot of thought to what specifically this would mean. Oh, I had general notions, such as wanting to be more involved with my kids than my father had been with my brother and me when we were growing up. What I hadn’t thought about was how my wife, Laura, and I would choose to handle our careers and the care of our children.

When we learned that Laura was pregnant, she was employed full-time with the American Red Cross, and I was working full-time for the U.S. Census Bureau as a research psychologist. We started discussing how we would handle working and baby care. Both Laura’s mother and my mother had been full-time, at-home moms when we were growing up, and we were quick to decide that we didn’t want to put our baby in daycare, at least during the first two years of his life. In our minds, the quality of care that we could give Liam would be better than that of even the best daycare arrangements. We also thought that we would all benefit from a better quality of life. If we both worked we would have to accomplish a lot more after work or on the weekends. With one of us at home, however, all three of us could be less stressed, more rested and organized, and we would have time to relax together as a family.

The decision about who would stay home was a little more difficult. Both Laura and I have invested a good deal of time, effort and money into our advanced degrees; Laura has an MBA and I have a Ph.D. in Experimental Psychology. It was hard for us to think about giving up (or putting on hold) careers for which we had worked very hard. Laura wanted to take six months of maternity leave before going back to work, so we had some time to work things out. Luckily, we were actually in a fairly good position to both continue to work and not have to put our child in daycare at all. Laura’s mother, Candy, offered to babysit two days a week. That left three days for Laura and me to cover between the two of us. This meant that one of us was going to have to cut back to part-time status.

So the question became which of us was the best candidate to do this. Our salaries were close enough so money wasn’t a major factor in the decision. A number of other considerations did come into play, however. First of all, it has always been clear that Laura likes her job more than I like mine. It isn’t that I don’t like my work, but I just don’t get the same kind of satisfaction from my job that Laura gets from hers. Laura also has very clear goals, and has great career potential, whereas my goals are more nebulous. We decided that, in the long run, it would be better for the family to avoid jeopardizing her career. If anyone’s career was going to take a hit, it should be mine.

Another consideration was that I have lots of interests that bring meaning to my life other than work. Certainly I derive a portion of my self-worth from using my advanced degree, but I also get tremendous satisfaction from a number of other activities (playing blues harmonica, woodworking, home renovation, and beer-brewing, to name a few). We felt that these strong interests would help me make the transition from full-time employment to a part-time gig.

As it turns out, I have quite a bit of flexibility with managing my time at work. It’s relatively easy for researchers to reduce their workloads; we simply cut back the number of projects in which we are involved. This is not an uncommon practice at the Census Bureau; I have run into several other parents who work, or have worked, part-time to be able to spend more time with their children. My own supervisor worked part-time when his children were young fifteen years ago.

Laura’s job does allow for some flexibility with her time, but her work responsibilities make it more important for her to maintain full-time work hours. Also, because of her career goals, I think that she feels a bit guilty about adjusting her schedule too much, and worries about how others perceive her dedication to her career. It would be wrong to say that Laura doesn’t want to stay home, but I can say that I very much want to be the at-home parent. I want to be an involved father. My own father admits that he was not very involved with the day-to-day care of my brother and me when we were children. But soon after Liam’s birth, my father pulled me aside and said, “That’s what it’s all about. Right there, that little boy. It has taken me a long time to realize, but you and Hank [my brother] are the two greatest accomplishments of my life.” I like to think that I reached this conclusion a long time before my father did.

My ability to willingly and competently provide quality, home-cooked meals for our family was another consideration in our decision. Laura will be the first to admit that I am a better cook than she is. Even before Liam was born, I was doing a significant part of the cooking in our house. Staying at home has actually provided me more of an opportunity to plan and prepare good meals for Laura and me, and someday Liam.

Another factor in favor of me being at home is that my personality seems well-suited to the work. Not only am I confident that I can handle the daily responsibilities of raising a child, but I also know that I am able to handle the difficulties associated with being in a family in which the traditional roles of mother and father are reversed. Of course, the wide majority of at-home parents are moms, so I am often the only father when Liam and I join groups during the week. Also, there are certainly negative stereotypes about fathers and their inability to care for their children, but I have found that the best way to deal with these is to set my resolve to prove to the world that these ideas are clearly wrong.

I have done quite a bit of soul-searching in my life, and I have come to the conclusion that for me, the meaning of life is love. The love that I have for my family is the most important thing in my life, and it means that I will always do what I think is best for my family, to the best of my ability. I loved Liam from the time before he was born. People talk about the “miracle of birth”—and it is truly an amazing thing—but for me the true miracle is watching my son grow each day. Just as he continues to grow and develop, so does my love for him. In the beginning I didn’t realize just how much it would mean to me to spend so much time with Liam and be deeply involved with his care. I have since realized just how wonderful an opportunity I have been given to be such an active part of his life.  In the future, when I look back, I want to know that I lived my life well, and have no regrets about the decisions that I’ve made. When it comes right down to it, my family is Priority One; everything else comes after that, including my career.

Currently, I am at home with Liam three days a week. Laura and I are starting to think about expanding our family, and we have decided that the birth of another child will most likely mean that I will stay home full-time. This idea used to make me a bit nervous, but now I see much more clearly the full scope of my decision. I find that I am now comfortable with, and even excited about, becoming a full-time, at-home dad.

2018 Update: Wow, it is hard for me to believe that it has been over 15 years since I wrote this! As predicted, about a month after I wrote this article I did indeed resign from my job at the Census Bureau and became a full-time stay-at-home dad; and I still am today.  Liam is now 17 and his brother Danny is 11, and although many things have changed since then, one thing remains the same: my family is still Priority One. Being an at-home parent is not always easy, but over the years I have become more comfortable with myself being an at-home dad; it is just who I am. The job has changed as the boys have grown, and it is hard to say how things would be different if I had not been home all these years, but I think that all four of us agree that our family is the better for it. We plan for me to be at home until Danny finishes high school, but now that Liam is a rising senior and starting to look at colleges I realize that one day my career as an at-home parent will come to an end. Reflecting last week on Father's Day, I realized how truly wonderful it has been for the boys and me to have spent so much time together over the years. It hasn't always been fun and games, but we have learned and grown together through our shared experiences. While it makes me sad to think that I will one day be forced into “retirement” when Danny heads off to college, I am at peace knowing that I have done my best to help them grow into the fine young men  that they are today. I am excited about their futures and will continue to love and support them as they head off on their own and hopefully someday find their own Priority One. 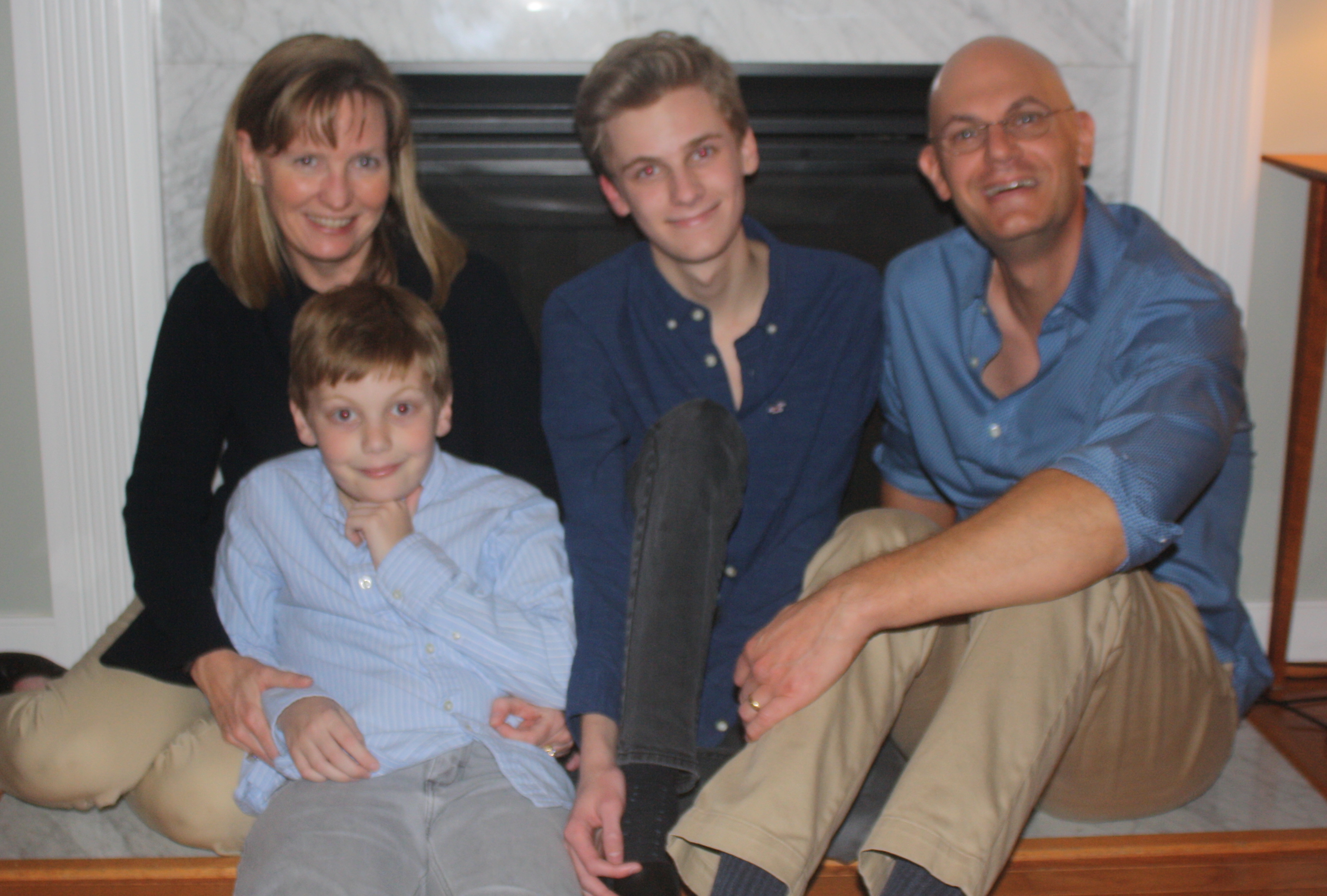 “Mommy, I Need Your Intention”