“Are we really going to paint today, Mommy?” Brian had asked hopefully one day when he saw the brushes standing tall next to the unopened jars of paint.

I had been hopeful, too. Before the new baby’s arrival, I bought construction paper, gooey paints and thick new paintbrushes, but six weeks into life as the at-home mother of two boys, I had discovered that a newborn baby was not compatible with dripping paintbrushes and a toddler’s clutching fingers.

In those first few weeks, it seemed no project could get more involved than finding the TV remote control; creativity meant nursing the baby while reading books to Brian in several different voices; a long walk took us as far as the car. Painting and napping and cooking and showering became ventures that required long-range planning.

That’s why that moment had been a big deal for Brian and for me. Baby Andrew seemed to be asleep, and we were going to paint together.

Brian started his picture with broad strokes of blue, small dots of red and few swirls of orange. I told him it was beautiful, and tried to replace the completed picture with a clean sheet. Brian insisted that he was not done.

Instead, he covered the entire work with rivers of green. Many, many brushstrokes later, the completed painting was a big blob of brown, with valleys where the brush tunneled into the thickly layered paing. I praised him for his talent and gave him a new sheet, secretly wishing that he’d paint something recognizable, or at least colorful. 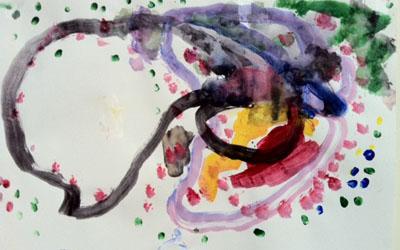 Thoroughly involved in the new painting, Brian never looked up, painstakingly brushing layer on layer, until once again he had created a big blob of brown. 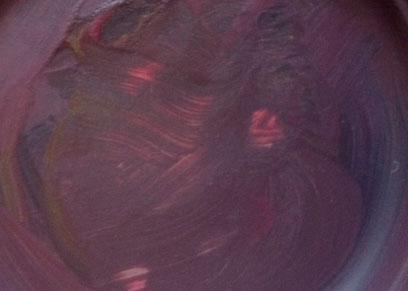 Eventually I stopped trying to direct him, and just enjoyed the process of his painting. His concentration, so exquisite… his expression, so intense… his eyes, so bright… his commentary, so constant.

It took a few paintings, but that day I slowly realized that this is why I stay home. Without the experience of watching Brian paint, all I would have seen was another toddler-style work of art like the ones we’d brought home from the babysitter. The completed picture is nice to hang up, but the important (and more interesting) part is the process of creating the picture.

During the past year, with a dawning awareness similar to that of a newborn, I’ve come to see that daily life is full of special moments like that one. By evening, the whole of the day is more than the sum of completed hours and projects. Because my boys and I are together all day, mundane moments can take on exquisite importance.

It’s one thing to read on a babysitter’s notes that Brian watched a Thomas the Train Engine video, and quite another to participate in the watching. We practice patience in anticipating the big moment, hum along to the bouncy music, invent a game of memorizing the characters’ names, and then relate a story about a selfish train to Brian’s own feelings about sharing toys with his friends.

At the playground, friends see Brian happily careening down the slide with other preschoolers. He and I know that “the golden slide” is the tall metal one that he has learned to love after countless agonized decisions to turn around at the top, many practice runs with me (baby Andrew on my lap), and innumerable slow rides with sneakers dug into the sides.

These days when baby Andrew, who is now almost two, growls in the library, everyone smiles. I know it’s not because he’s tired of reading. A little boy just walked into the children’s room with a lion on his shirt, and that’s how Andrew greets all lions, bears and dinosaurs.

The intensity with which Andrew greets his father every evening is mirrored in the intensity he brings to squeezing crayons into a box, pulling books off the shelf and dragging a heavy boot across the floor. Connecting those seemingly unrelated events is simple because I’ve been part of their daylong unfolding.

Today we opened the paint bottles again. In the past year, Brian and I have painted many pictures together, but this was Andrew’s debut. What a colorful mess! Paint on hands, faces, hair, chairs and mom. Four bright eyes, twenty sticky fingers and laughter all around.

Their finished product is a typical mix of handprints, solid globs and feathery brushstrokes that will be duly appreciated by others. But for me this painting is much more than what anyone can see. I know that Brian generously shared his space at the table to show his brother how to smack the paper with paint-coated fingers. I have the treasured memory of Andre’s giggle when the brush tickled his hand.

These fleeting moments are the brushstrokes that fill up the canvas of our life at home together. It’s going to take a lot of time to fill it in, but it’s worth it. After all, we are working on a masterpiece.

This article first appeared in the September 2000 issue of FAHN’s journal Welcome Home. We contacted Marybeth recently, and she said, “my children have grown so much since I wrote that article, and I’m still discovering ways to appreciate their unique personalities. They are now 15, 12 and 10. I stayed at home with all three while they were small, until the perfect part-time job found me – in the communications department of the public school division where my children attend school. No commute time, and always able to be home after school!”

All care for children must be supported including care by parents themselves!

Show your support today with a generous donation!

The Essence Of Mothering