As we strolled through the doors of our local Hallmark store, my nine month old daughter Carolyn burst into tears.  Ghoulish rubber masks – bloody monsters and faces contorted in panic or screaming in horror -- lined both sides of the aisle at stroller height.  I made a quick 90 degree turn down a side aisle stocked with index cards and manila envelopes.  “Oh, silly faces!  Those were for Halloween,” I explained as I comforted her.  She didn’t know what Halloween was yet, but the masks were undeniably scary and every child knows what that is.

A week later at the pharmacy, a cackling witch’s voice cried out to us as we stepped up to the cash register, scaring Carolyn half to death.  Apparently, we had tripped her into talking when we set our purchases down.  Again, I used my calm mommy refrain, “Oh, that silly witch!  She’s just silly!”  Carolyn relaxed in my protective arms.

Since she was pre-verbal, Carolyn seemed to understand my tone more than the words I was using.  So I used a mocking, sarcastic tone of voice to denote silliness, and  wrinkled up my face in mock disgust.  I explained to my husband about the Halloween displays already up in stores – though it was just the end of summer.  Warning him to be on the lookout if he had Carolyn with him, I told him my new code word – silly instead of scary – and explained how I used it to reassure her.

Soon there were Halloween decorations sprouting up in our neighborhood.  There were friendly tiny orange pumpkins strung along fences, smiling orange trash bags filled with autumn leaves, and happy green witches smiling from flags waving in the fall breeze.  Then there were the others: Frankenstein propped against a tree; an athlete hanging from a basketball stand, his head stuffed inside the hoop; a monster in a tree, his arms and legs blowing toward us in the wind.  I made mental notes to avoid strolling those streets.  Now not only the stores, but my neighborhood, were unpredictable.  For two months, we couldn’t go anywhere ‘safe.’

The next year, Carolyn was was just shy of two years old and eager to make her trick or treat debut.  Well aware that this night was filled with silly faces, she dressed in her angel costume and joined her three-year-old friend (dressed as Tigger) to navigate porch steps and stretch on tip toes to ring doorbells.   Everything was going smoothly, silly faces and all.

Suddenly, as Carolyn and Bryce were getting some candy, some eight and nine year old boys with bloody fact paint rushed up the porch steps behind them, inadvertently scaring the living daylights out of them.  It took a lot of reassuring back on the sidewalk to calm them down.  At another house, a father came to the door dressed as a very realistic Frankenstein.  It’s one thing when little kids are dressed up silly, but it’s quite another thing when it’s a six foot man with broad shoulders. 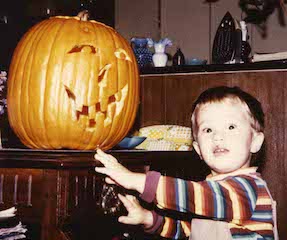 When Carolyn was nearing three, I started explaining what mannequins are in shopping malls.  We watched a saleswoman dress a mannequin in a store window.  Carolyn seemed to understand and would point them out to me from time to time.

Halloween Season approached again, and one day we went to the pharmacy to get our pictures developed.  Right next to the film stand was a life-size Darth Vader, dressed in black from head to toe, with a shield, boots, and no face.  Carolyn recoiled behind me.

“Oh, look at this silly guy!  He’s funny, isn’t he?”  I filled out my film envelope and ignored Darth.  “Step on his boot, Carolyn, and you’ll see he’s made out of plastic.”  She wasn’t game.

“Shake his hand,” I said, sealing my film envelope.  She shook it.  He didn’t shake back, or bark, or bite, or whistle.  Carolyn was almost rolling on the floor now in triumph.

"Silly guy!” she yelped as she pranced all around Darth.  “YOU SILLY GUY!”

The Unsung Heroes: What About Working Dads?