The Essence Of Mothering

Motherhood has always raised more questions in my mind than it has answered. Just when I feel I’ve mastered the mechanics of an aspect of childrearing, that I’ve achieved total comprehension of my role as a mother, I experience the essence of mothering in a completely new and unanticipated way.

We traveled to Latin America to adopt our youngest son. This particular child never squashed my navel into a gnarled bump under my waistband. He pushed another woman’s abdomen outward, and then he pushed his way directly into our lives. Like the latest NASA spacecraft, he needed two rockets to launch him into the world. His birth mother gave him his DNA and his first breath. My job will be to give him the propellant he needs to escape our family’s gravity. Ultimately, though, neither of his mothers will follow him into orbit. Neither of us can protect him from the shock of re-entry or the threat of malfunctioning equipment. Neither of us can control where he goes. All we can do is launch him and hope.

For a time, I lived in Latin America with my son, tending my tangled garden of paperwork, awaiting the small but precious harvest known as a “final decree.” The adoption process stripped me of all my other roles. I was not wife or car-pooler or volunteer or citizen. I was this boy’s mother, and nothing more. Circumstances distilled in me the essence of motherhood.

Over and over again, not only in court but also in conversation with inquisitive strangers, I avowed my identity as the baby’s mother. “Es mi hijo.” He is my son.

Ahh! Exclaimed the curious strangers. And is he your first? No. “Es el quinto.” He is the fifth. A real conversation stopper.

Then I would pull out a picture of the baby’s four siblings. I would recite their names and ages and answer questions about them in my exasperatingly inadequate Spanish.

But the words didn’t matter. My feelings for these faraway children were inexpressible in any language. Somehow, my distance from them had given me a new understanding of the essence of mothering. The four of them were beyond my touch, beyond the range of my shouted warnings, and safe at last from my ungentle mouth-wiping with a tissue. Yet they were still strangely present too, pushing me outward, filling me to the bursting point.

As an adoptive parent, I struggle with the question of what makes us mothers. But I also grapple with a murkier question: what does motherhood make us? It seems to me that mothering has expanded my soul in exactly the same ways that pregnancy stretched my abdomen and adoption enlarged my world. Mothering has forced me outward, rounded me, and pushed me to my limits. Motherhood, like childhood, is an expansive flight that has turned me inside out; the intoxicating scent of it in its purest essence has left me breathless more than once. 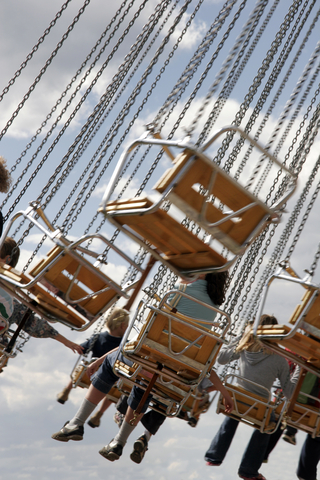 I caught a whiff of that essence again one summer evening as I watched three of my children on a carnival ride. They flew above me, rocking out and up in their little trapeze swings. The oldest crossed her feet at the ankles and tilted her head to one side, closing her eyes and smiling serenely as the twilight breeze swept back her hair. Her sister kicked at the air and looked around with moderate interest, probably thinking of something else altogether. Something practical, no doubt.

The youngest didn’t seem to believe it was really happening. He was just barely tall enough to qualify for this fearsome-looking ride, but he shrewdly chose an outside swing, one that would lift him up higher and higher. His mouth never closed, his hands never stilled. He seemed to be the motor that powered the ride. He seemed propelled by his own delight.

Suddenly, I felt those children to be three pieces of myself, flying up and away from me. I felt them as three aspects of myself: the tranquil, the sensible, and the awestruck. And I knew that there would be no more carnival rides exactly like this one, no more summers exactly like this summer. I knew that they would launch themselves soon, venturing into the far unknown, leaving their solid rocket boosters behind.

What is the essence of my life as a mother? Why do the swings on the outside fly higher? When did the sweet pear-scent of my baby’s neck fade into the sharp, copper-penny smell of little boy sweat? Why can’t I fly with them? Where will the carnival be next week?

Rosemary lives in suburban Philadelphia, where she enjoys gardening, salsa dancing, and the company of five remarkable young adults who vaguely resemble some children she once knew. She uses the organizational skills and negotiating techniques developed during her child rearing years in her career as a software implementation project manager.